Malibu, the UK’s no.1 coconut flavoured rum[1], is continuing its mission to become a global icon of summer by exploding onto TV screens for the first time in four years. The new advert is a key part of the brand’s overall ‘Because Summer’ campaign, which will include a host of activity aimed at Malibu’s target audience of ‘Social Butterflies’.

On air from May – July in two bursts, the advert will feature four alternative endings promoting popular serves using Malibu, including a Piña Colada, Malibu Cola, Malibu & Pineapple and Malibu’s ready-to-drink cans (RTD), which are available in three refreshing flavours.

Adam Boita, Head of Marketing at Pernod Ricard UK, comments: “We’re incredibly excited to be showcasing Malibu on TV once again with a series of films that have already proven to be a huge hit with our target audience. We debuted the ‘Because Summer’ films last year across our social media channels and to ensure they continue to be viewed by as many people as possible, we’ve refreshed them for 2017. Featuring song-of-the-summer ‘Rich Boy’ by Galantis as this year’s soundtrack, we’ve ensured the advert is scheduled during ‘guilty pleasure’ programmes across the channels most watched by 18-24 year olds: C4, ITV2, ITV Be and Sky. 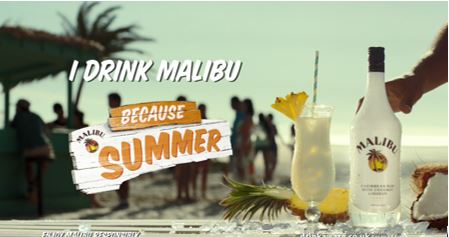